Corona virus and vulnerable communities, how to save more lives in Syria 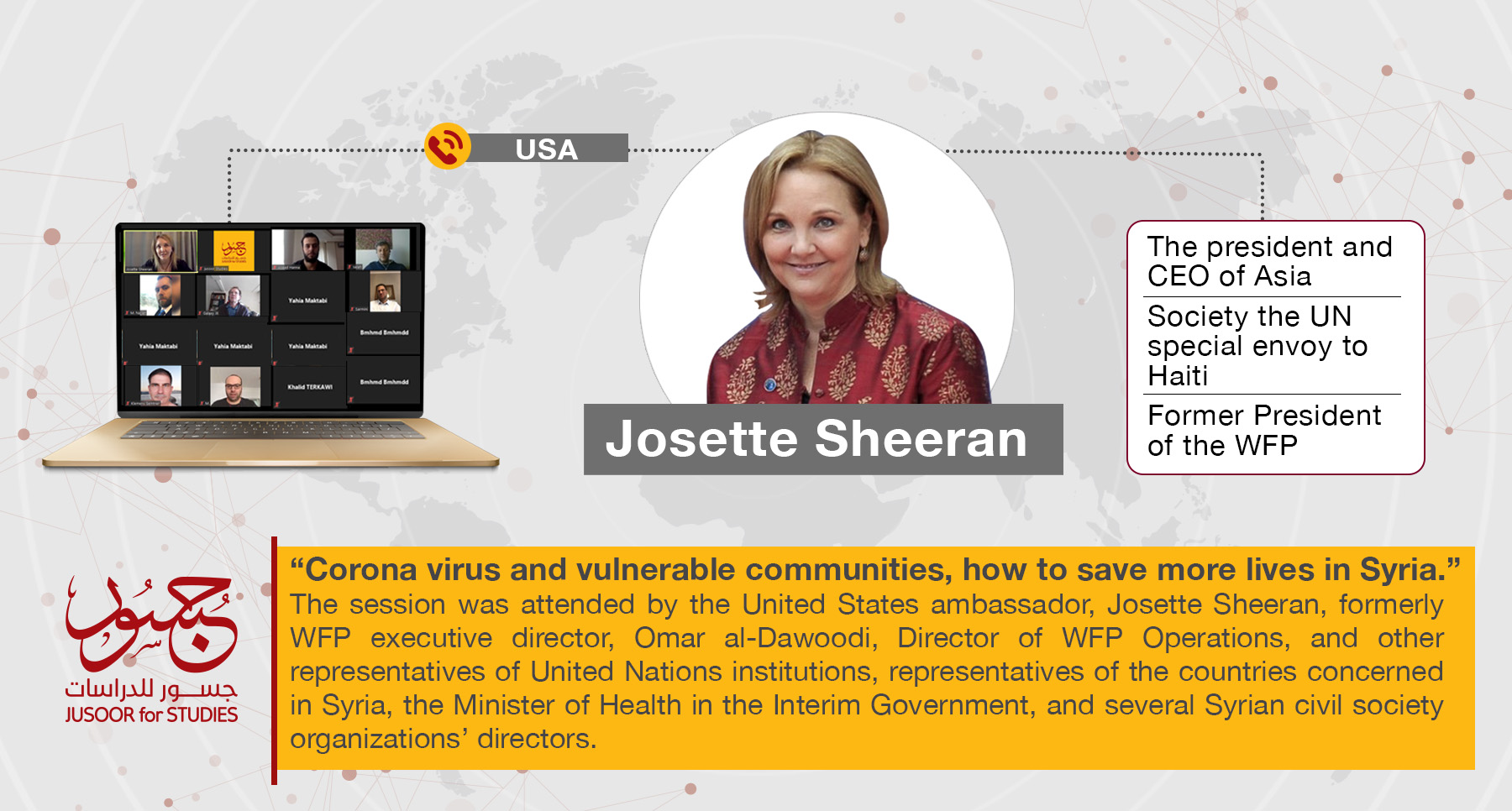 Corona virus and vulnerable communities, how to save more lives in Syria

Jusoor for Studies held a meeting with several political and civil figures, entitled:
“Corona virus and vulnerable communities, how to save more lives in Syria.”
The session was attended by the United States ambassador, Josette Sheeran, formerly WFP executive director, Omar al-Dawoodi, Director of WFP Operations, and other representatives of United Nations institutions, representatives of the countries concerned in Syria, the Minister of Health in the Interim Government, and several Syrian civil society organizations’ directors.
The meeting began with a briefing from the director of Jusoor for Studies, Muhammed Sarmini. He talked about the reality of the IDP camps in northern Syria, and the serious repercussions that will occur in the event of an epidemic. Also, the American Ambassador Josette Sheeran discussed the similarities and differences between the cholera and Corona epidemic, and the necessıty to intensify studies that inform about the basic important needs of the affected areas in Syria due to military operations, as is the case in Idlib, in order to inform donors and fill gaps regarding those needs, and to promote a rapid response and support the United Nations plans to prevent the spread of the epidemic in Syria. Furthermore, the ambassador discussed the need to take care of vulnerable societies since these are communities with high population density and poor humanitarian supplies, as well as the need to ensure the quality of materials supplied before purchasing them to ensure that purchases are not wasted.
While Mr. Omar Dawoodi, Director of WFP Operations, talked about the efforts of the WFP and the necessity to develop a rapid response to the impacts of the epidemic through sending relief materials and food to accessible areas in and around Syria, given that such a crisis has medical, nutritional and economic dimensions, and he added that the organization is working hard to avoid a new disaster in the region.
The Minister of Health in the Interim Government, Dr. Maram al-Sheikh, also spoke about the tragic situation in Syria, the main and necessary needs to protect civilians, and the efforts that the Ministry has been undertaking recently.
The meeting was held via the virtual ZOOM platform due to the current circumstances which facilitated the joining of a number of researchers around the world like Turkish researchers and activists and American activists from Columbia University in New York who are interested in the affairs of refugees and displaced persons.