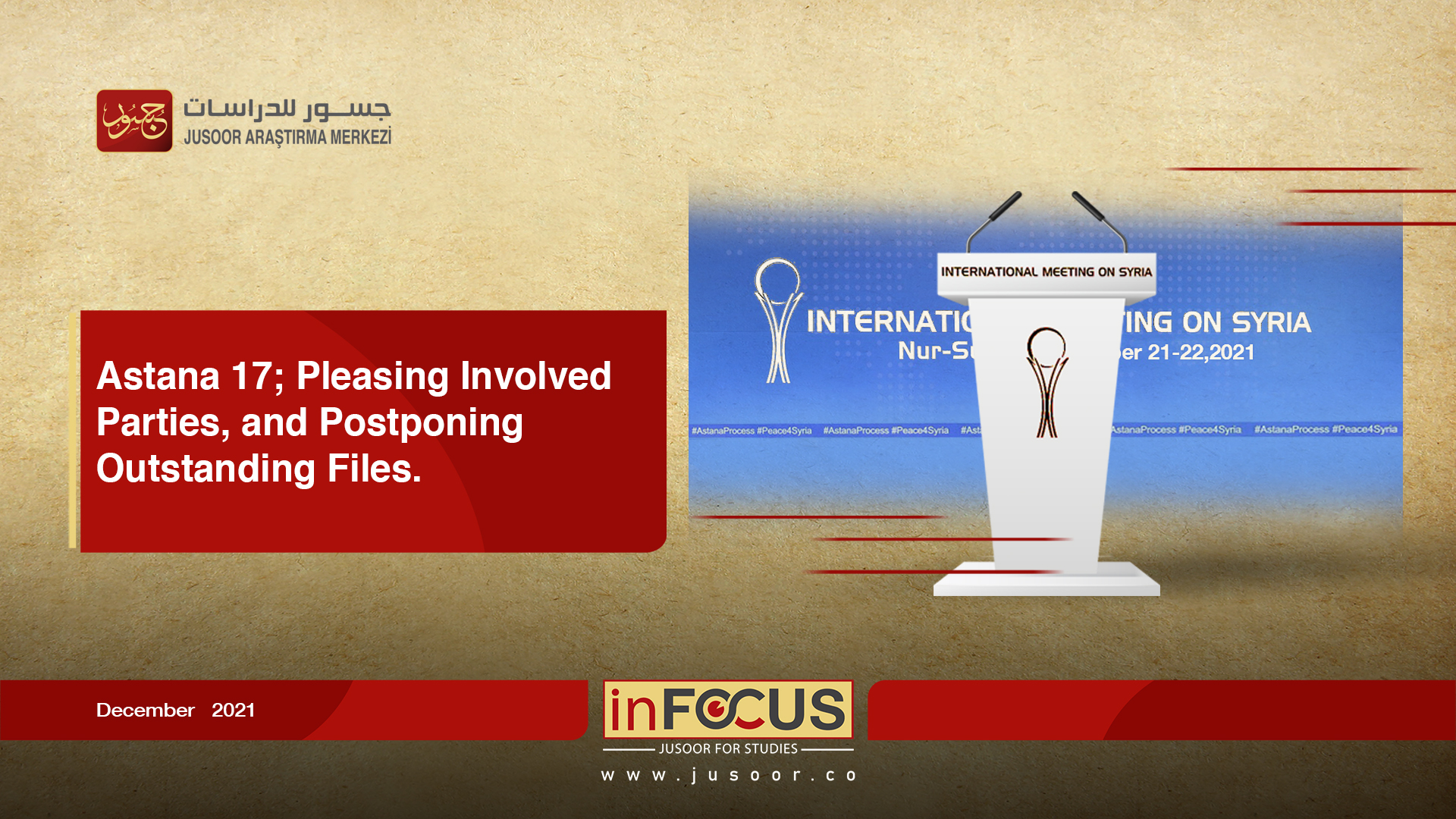 The 17th round of the "Astana" talks on the Syrian issue started Tuesday, December 21, 2021 in the Kazakh capital, "Nur-Sultan", with the attendance of the delegations of the guarantor countries Turkey, Russia and Iran beside the delegations of the Syrian regime and the opposition along with the delegations of Jordan, Iraq and Lebanon who took part in the talks with the status of "observers". In the attendance as well were the representatives of the United Nations and the International Committee of the Red Cross (ICRC). The two-day round of talks was concluded by a final communique on Wednesday, December 22. This round’s communique had 18 points, most of which did not differ from the ones in the previous rounds, like commitment to Syria's political unity, sovereignty and territorial integrity, fighting terrorism and supporting a political solution; especially the course of the Constitutional Committee. It furthermore, echoed what was included in the previous communiques of rounds (15 and 16) when it mentioned “constitutional reform” rather than “writing a new constitution.” as stated in the UN resolution. Unlike previous communiques, the current one calls on the international community and international organizations to assist in the so-called "early recovery" process in Syria, and it refers to "local domiciliation", which implies the reconciliations made. Such an act is considered a more successful method for restoring security and stability. By the way, this is the first Astana round, which is not preceded by a Russian escalation against opposition-held areas, as the case was with previous rounds. Bombarding civilians was then used to exercise pressure and provoke the opposition delegation before any round of talks. As is customary, this round was preceded by a move to exchange prisoners at the "Abu al-Zandin" crossing point under the supervision of the Turkish and Russian sides, and to pass humanitarian aid across the frontlines between the opposition and regime-held areas from the "Saraqib" crossing point, taking into consideration that the procedures for releasing detainees and passing aid are still formal or symbolic, and to the minimum extent. In light of the seventeenth round of Astana, multiple signs can be considered: - The “Astana” track today, more than ever before, can reflect the connection between the political course and what is happening on the ground. In this regard, each of assessing the work of the Constitutional Committee and scheduling its meetings in Geneva are now to be decided after being agreed with by Astana process' guarantor countries, Turkey and Russia in particular but under the watchful eye of Iran, which means that the political process as a whole has had a greater shift towards the "Astana" track. - Through the "Astana" platform, Russia is trying to redefine the work of the Constitutional Committee and limit it to working on constitutional reforms, not writing a new constitution, and re-promoting reconciliations as a more successful model for achieving stability. - The northwestern region of Syria is heading in the next stage to more relative stability, although some outstanding issues remain. Accordingly, the major challenges are to open the “M4” international highway to joint patrols and commercial traffic as well as the working to separate the moderate opposition from the extremist groups. In fact, fulfilling such tasks can ensure that the ceasefire continues to hold, albeit in an anxious and temporary manner. - The outputs of "17th round of the Astana process" - in confirming support for stability, establishing a cease-fire, an early recovery process and easing the economic sanctions imposed on the regime - are not much different from the "Russian-American" understandings regarding dealing with the Syrian file. After all, it is likely that the main objective of this round of the "Astana" is merely to maintain the track and to keep it alive. Also, it seems that this round has come to confirm the agreed-upon outlines and at the same time in order to postpone the different views of the guarantors, with Russia's keenness to consolidate some political gains, even if they are not agreed upon. Furthermore, preserving the continuity of the course of the Constitutional Committee and giving the opportunity for a new round in "Geneva" were likely targeted by holding the recent round of talks.