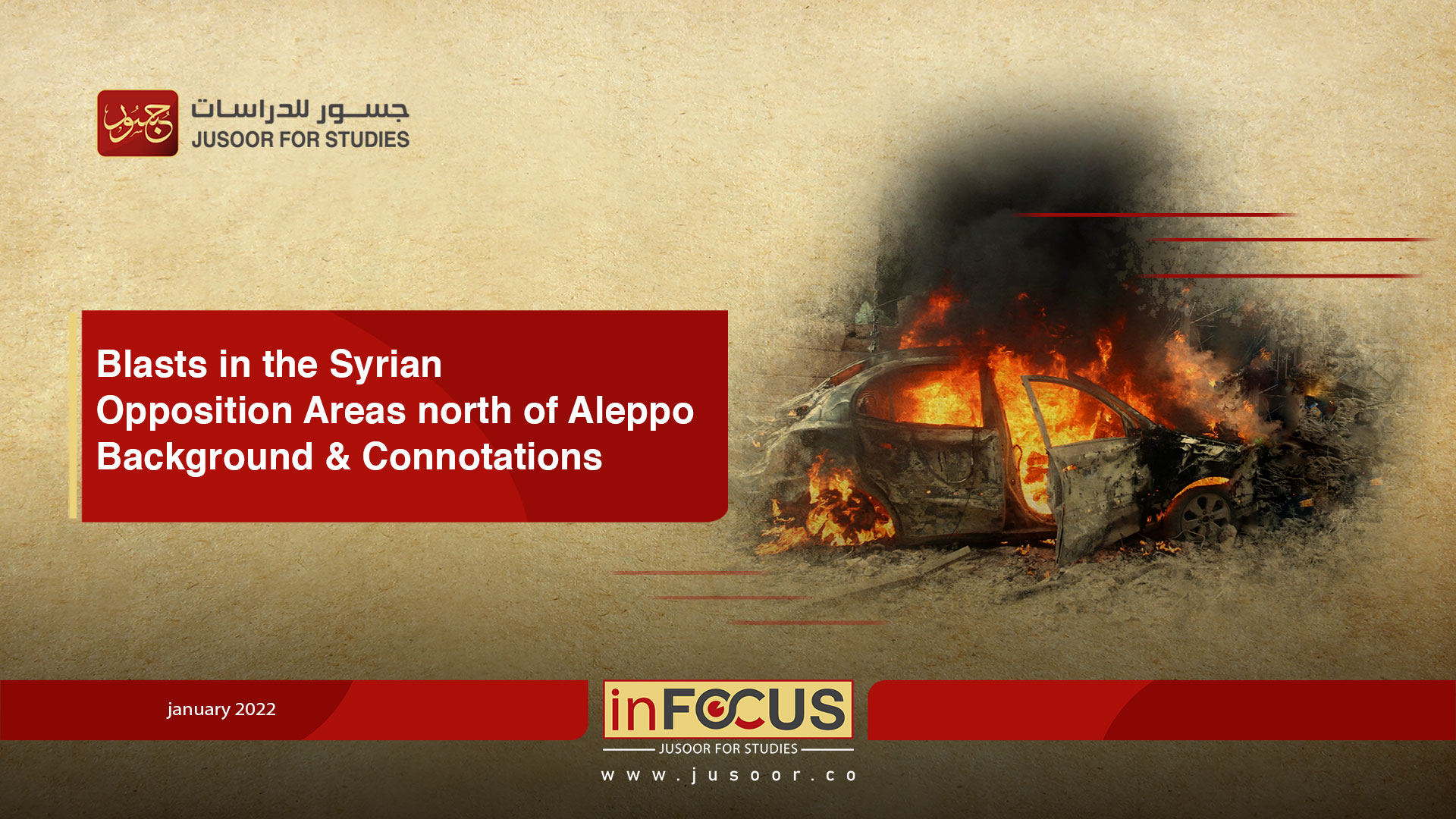 Blasts in the Syrian Opposition Areas north of AleppoBackground & Connotations

The Syrian opposition-controlled areas north of Aleppo witnessed three simultaneously timed blasts, Thursday, January 13, 2022. The first one in "Azaz" was an explosive device planted in a civilian car in the northern neighborhood of the city and close to the "Transportation" building. It occurred in conjunction with the dismantling of another explosive device, near the "Al-Jundi" mosque in the city center, before it went off.  The second explosion was carried out by a suicide bomber in the main bus station in the center of the city of "Al-Bab". And the third explosion was also carried out by a suicide bomber at the "Kawa" roundabout in the center of the city of "Afrin" near the headquarters of Jaysh al-Islam.

It is noted, however, that these explosions came after a relative interruption for a period of approximately 6 months during which the areas of the of the Syrian National Army deployment areas, north of Aleppo, have not witnessed similar incidents. These areas are occasionally subjected to security targeting by the Syrian Democratic Forces (SDF), ISIS, and the Syrian regime alike.

The reasons for such an interruption are primarily due to the relative success achieved by the unified command room starting with its formation in July 2021. This room resulted in reducing the security chaos relatively within its areas of operations, especially since (Azm) was established based on the unification of the work of the security offices among the factions, which made security breaches a top priority.  This can be noticed in the campaigns carried out by its security apparatus in the Al-Bab and Azaz sectors between July and October of last year.

If ISIS usually resorts to reducing the volume of its activities in areas witnessing intense campaigns, as it did in the east of the Euphrates in 2021, this will be more necessary in areas of the Syrian opposition, where it already suffers from interruptions of supply and communication lines.

Despite such security alerts, it cannot be said that the security scene in the Syrian opposition areas north of Aleppo has become under more control than it was before.  This is due to the incompleteness of the security offices merger, and to the withdrawal of some factions from the unified command project. That is, in addition to the fact that others are satisfied with mere coordination mechanisms without full integration. Add to that, the persistent existing gaps that should be addressed, and whose fixing requires large financial and logistic costs.

The return of bombings does not necessarily indicate a decline in the performance of the new administration of the security file in the opposition-controlled areas north of Aleppo, it rather means that there is an ability to grab the opportunity and circumstances to continue the attacks regardless of the party behind them. As such, the clear goal is to weaken confidence in the ability to control the security scene in the region.

Therefore, the opposition’s ability to face security challenges will be more difficult, especially when ISIS may have a new opportunity to strengthen its access to the opposition-held areas north of Aleppo; especially after the increase in the number of members released by the “SDF” since December 2021, in exchange for reducing the size of Operations within SDF areas and securing an exit for ISIS.