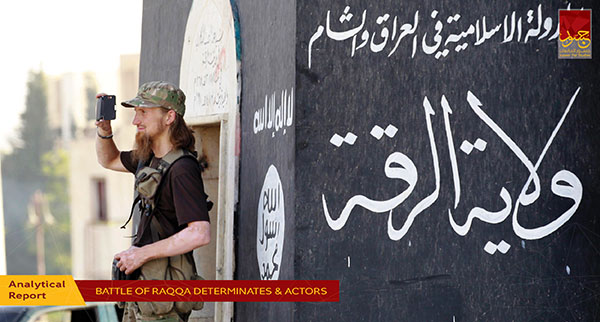 After start battle of Mosul on October 17,2016, united states and France rushed to brandish the possibility of launching a large-scale military operation to take control of the second stronghold of ISIS in Raqqa, concurrently with the ongoing battle to control Mosul .
This reflects the international trend of the need for start of the second phase of the battle of Raqqa and resume military operations which has been frozen shortly after it began on May 24,2016 , the date that Syrian democratic forces announced the launch of the primaries first phase to control the city , and providing full attribution by the international alliance led by Washington .
The first phase was by progressing to the city and its northern countryside ,where Syrian Democratic forces mobilized its fighters in Tal Abiadh and moved to south to advance in depth and took control of the towns : Al-Fastah , Al-Heshah  ,Shaikh Essa and brigade 93  , and then launched an offensive toward west of Shaikh Essa within the fourth axis which aims to progress towards the city of Tabaqa and within this axis it has been controlled 9 villages such as ; Khashkhash Al-Kabeer, Noukut , Beir Al-a'amaa and Janaf Al-Ahmar  .
Freezing of the battle was due to a wide military strategy in USA and international alliance against the organization, aims to cut the main supply routes before launching any attack on both capitals of the organization in Mosul and Raqqa, where Syrian democratic forces launched a wide